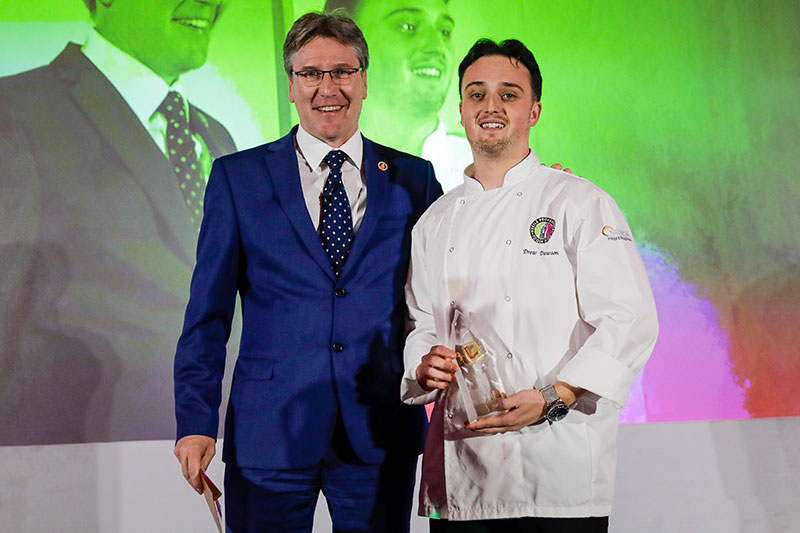 Last week, the winner of the 2019 Nestlé Professional Toque d’Or® competition was revealed as chef apprentice, Drew Dawson. Drew, aged 23, had reason for double celebration as in the same week he also received a Distinction – the highest mark – in his Commis Chef apprenticeship, which he completed at The NED London, part of the Soho House Group.

Now in its 31st year, Toque d’Or® is one of the UK’s most influential industry competitions, bridging the gap between the theories of the classroom, work-based learning and the exciting reality of the industry. Drew competed against the 400 applications to this year’s contest and was ultimately crowned the winner after a four-day grand finale. The four rounds of the final included:

Speaking at the award ceremony, Drew said: “I’m absolutely over the moon! It’s an experience of a lifetime and I’m so lucky to have been given this opportunity.

“Competitions like this show just how supportive the industry is, giving young people the opportunity to do great things. I think the best part of the competition was meeting the farmers and really understanding the supply chain and how everything fits together.”

Commenting on Drew’s fantastic achievements, Jill Whittaker, Managing Director of HIT Training, said: “The team at HIT and I are beyond thrilled for Drew, not only has he competed at and won one of the sector’s most prestigious and tough competitions, but he has also been awarded a Distinction in his Commis Chef apprenticeship.

“At HIT, we develop apprenticeship programmes designed to provide learners with a wide breadth of skills and experience that not only helps them in their current roles but provides them with the knowledge and expertise to build a successful career in the hospitality industry. It’s an honour to see apprentices like Drew go on to achieve great things and it really highlights the value in high-quality training.”

The theme of the 2019 Toque d’Or® competition is Sustainable Futures, which aimed to raise awareness of the future of the foodservice industry and covered menu, operational and career sustainability.