Rikki is currently the Head Chef at The Plough Inn in Nuneaton, Coventry. In his role he is responsible for the day-to-day running of the kitchen and overseeing all the food production and menus.  As well as this, Rikki manages a team of three chefs.

“I started working at a pub and restaurant in Wolvey, as a pot wash during my school summer holidays and at weekends.  To begin with I took the job to earn some money so that I could go out and see my friends, but the more I worked the more interested I become in the running of a kitchen.  I was always very intrigued about what the chefs were doing and why they were doing it, and would constantly ask questions.  This sparked an interest in working as a chef, so as part of my school work experience, I spent two weeks working full time in the kitchen helping out with the food prep and cold garnishes. The chefs could see my passion and interest in cooking and always took the time to explain the processes within the kitchen to me.”

“After working in the kitchen temporarily and as part of my work experience, I built up a passion for cooking.  By learning from and speaking to the chefs around me I knew that it was something I wanted to do as a career.  My employer noticed my passion and interest and, once I finished school, they offered me a full-time job in the kitchen. 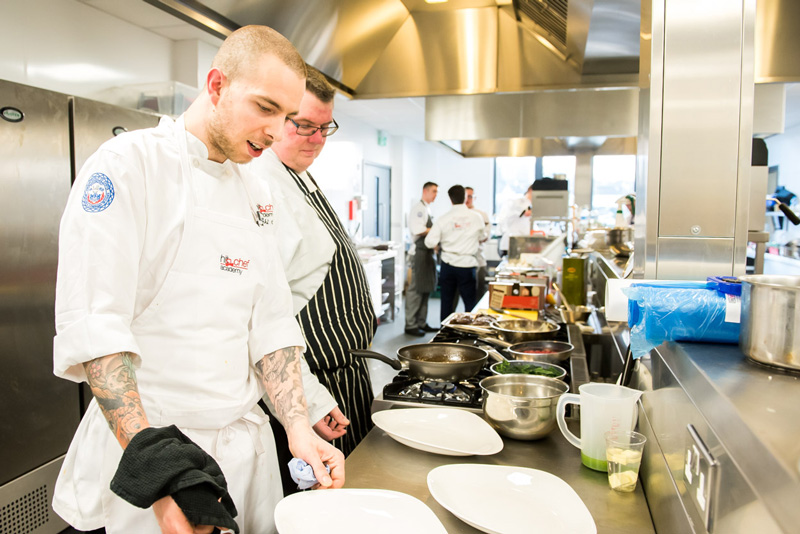 “To begin with I received no formal training, the chefs at The Axe & Compass trained me on the job whilst I worked alongside them.  I was lucky to be surrounded by such a talented team, the Executive Chef at the time used to be a Sous Chef under Marco Pierre White, so it was a great training ground for a young chef. I worked there for four years and progressed to Chef de Partie, from there I worked in various establishments before joining The Plough Inn in 2012, where I’m currently Head Chef.

“I had been working at The Plough for a year when I was introduced to HIT Training and the training and apprenticeship courses it provides.  Having never received any formal training I knew there would be a number of things which I didn’t know, so I enrolled on a Level 2 Professional Cookery Apprenticeship and have never looked back.  After learning so much and developing as a chef on this course, as soon as I finished I went straight on to do a Level 3 Professional Cookery Apprenticeship and then directly onto my Level 3 Hospitality and Supervision and Leadership Apprenticeship, which I am currently doing.  Once I complete this qualification, I hope to do the Level 4 qualification.

“My apprenticeships have been invaluable in helping to build my career as a chef, although I had received brilliant training from the chefs at my first job, the apprenticeship has opened so many doors for me and allowed me to be the best chef I can be.”

“It’s important to keep learning and putting as much effort as possible into what you do, even if to begin with you’re just washing pots.  Having passion, interest and a strong work ethic will stick out to employers.

“To anyone who wants to build a career within hospitality and develop their skills, I would recommend doing an apprenticeship.  The support I’ve had from HIT Training has been a massive part of my development and my trainer assessor has gone above and beyond to provide me with opportunities to grow and learn new skills.  For example, this year he arranged for me to go and spend some time with Michelin-starred chef, Glynn Purnell, so that I could build on my skills and experience.  Doing an apprenticeship has not only benefited my development, it has also helped the business I work for and my team, so much so that I have enrolled some members of my team on to apprenticeships with HIT Training.

“Having received such great training and witnessed the benefits of this, I am passionate about helping the younger generation embark on careers in hospitality, in the same way that I was supported when I started out. I am always happy to take on young apprentices from my local area to do work experience in my team, so that they get a taste of being in a professional kitchen.”