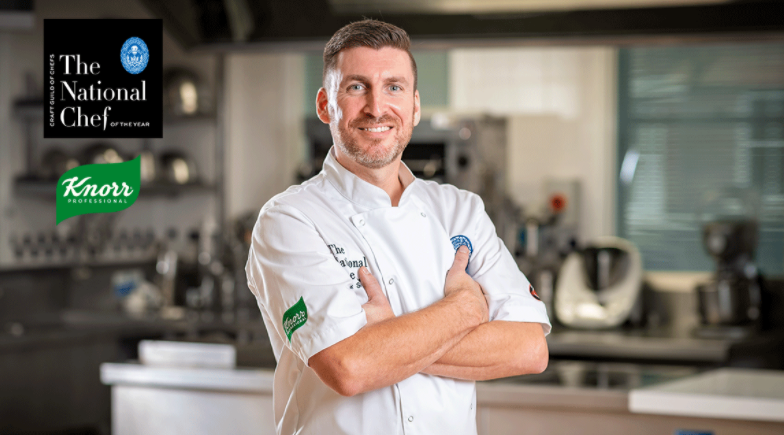 In what has been described as the toughest National Chef of the Year event in the competition’s 48-year history, Nick Smith, head chef at Vacherin has been crowned as the winner in a tense virtual awards ceremony this afternoon.

Watched by hundreds of the biggest names in hospitality, as part of Hospitality Week, the event saw the streaming of the final which took place at Le Cordon Bleu earlier this month. Viewers saw emotion, passion, blood, sweat and tears from the ten finalists who have shown such resilience and determination in the face of hospitality’s toughest era.

Derek Johnstone, head chef at Borthwick Castle finished in second, achieving a top three position for the third year running, with April-Lily Partridge taking third place. April-Lily has made history by being the highest female finisher in almost 50 years.

Chair of judges, Paul Ainsworth said: “It is a real honour to be chair of judges and crown Nick Smith as the winner. When I took on this role, I could never have imagined chefs would be facing the extreme challenges this pandemic has brought. It’s hit our industry hard, but the fact these chefs put themselves forward to compete, despite such uncertainty in their professional and personal lives, is so inspiring. I loved the second stage where chefs had to sum themselves up in a few bites as this gave us an insight into the chefs’ characters too. Winning NCOTY is about more than cooking delicious food, it’s about being an ambassador for your industry and supporting others. We need winners like Nick to show the world what an amazing industry hospitality is, to encourage others to want to be chefs and to incentivise people to work hard to achieve their own personal dreams. Nick’s attention to detail when cooking and the passion he has shown throughout this competition has been incredible. You could see how much this title means to him and he is a really deserving winner.”

David Mulcahy added: “There was never any doubt that National Chef of the Year would go ahead this year; we just needed to work out how we could make it happen with so many  restrictions. Hospitality has been on a real rollercoaster over the last few months, we have been catapulted through food shortages and businesses closing and we’ve seen families affected. None of us knew where we were going to end up. But through all of this we still have to battle on and keep going. We took the competition as our responsibility to help those chefs who needed a focus, a distraction and something to fill their time when life felt empty. When everything else was taken out of chefs’ control, NCOTY has given them something to think about and work towards. It’s been an awful but very special year for the competition and Nick is a remarkable winner. He’s remained incredibly positive, focused on his family and done what he needed to do to help him get through this. We are delighted to welcome Nick to that long list of winners and have no doubt he’s going to thrive as the National Chef of the Year in 2021.”

Knorr® Professional is the headline partner of National Chef of the Year and Alex Hall, Executive Chef UK &amp; Ireland, said: “Knorr® Professional is a proud and long standing sponsor of National Chef of the Year and, under the most unique of circumstances this year, it’s once again been fantastic to be involved in the UK’s most prestigious cooking competition. This year’s competition criteria shone a spotlight on something we’re hugely passionate about as a business: the need for greater biodiversity in cooking. We are championing this with the Future 50 Foods – a Knorr initiative in partnership with the WWF. The finalists all had to incorporate at least one of the 50 most sustainable ingredients into their menus and we saw brilliant variety and creativity in doing so from all the competitors. By cooking with more sustainable ingredients, these chefs are leading the way in influencing how future generations of chefs cook, for a better food future.”

As the winner of National Chef of the Year, Nick not only takes the title and winners medal but he also wins the opportunity to create his own digital recipe book or a have a media training session with opportunities to raise his profile up to the value of £7,500 working with Knorr® Professional and Unilever Food Solutions. Continental Chef Supplies (CCS) and Valrhona have collaborated to offer a stunning prize trip. Along with the top two contestants from last year's National Chef of the Year competition, Nick will be taken away in 2021, this trip will involve exquisite food in one of the world's top restaurants, stunning scenery and a chance to delve deeper into the history of our industry than ever before. Nick will also receive an exclusively designed winners plate framed together with his winner’s medal and £500 worth of Churchill products and a bespoke knife courtesy of Savernake Knives.

For 2020 a new award has been announced which is the Best Pastry Award sponsored by Valrhona. This was chosen by Paul Ainsworth, Graham Hornigold and Kuba Winkowski and awarded to Nick Smith for his Sweet Eve strawberry split, clotted cream, lemon and mint.